John 1:29
The next day John saw Jesus coming toward him, and said, “Behold! The Lamb of God who takes away the sin of the world!
I have 3 cats: Cocoa, Gracie and Sweet Pea. They all like to be rubbed and petted as most cats do.  But Sweet Pea is special.  Almost every day she’ll be sitting in the front of the house waiting for me to pull into the driveway. When she sees me coming I’ll see her small form as she start to make her way over to where I park. Once I step out of the car she’ll run in front of me and fall down at my feet and I’ll bend down and pet her. I know you may think that’s nothing special and that your cat does the same. Sweet Pea is the only one of my cats that does this. She is my special cat ~ because I rescued her from a life of starvation and a 4x4 cage. She falls down because she knows I’m the one who saved her, the one who has taken care of her, the one who feeds her and loves her. 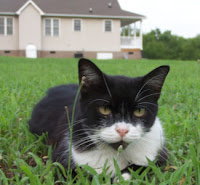 I fall down because He is worthy of my worship.

What else do you need before you fall down to worship the one who came to take away your sin, my sin, a world full of sin?


Behold! The Lamb of God!
Posted by SFM No comments:

Psalm 4:5
"Offer the sacrifices of righteousness and put your trust in the Lord."

What are the sacrifices of righteousness?  Here are a few on my list....
~take time daily to read and meditate upon God’s word
~radical obedience
~keep the Lord’s commandments
~sow seeds of His word to those around me and around the world
~live a quiet and peaceful life
~show mercy
~allow for grace
~judge no one
~have patience
~show kindness
~pray without ceasing
~give freely of what God has given me
~give thanks to the Lord in all things
~do the right thing

…..what’s on your list?
Posted by SFM No comments:


The encounter with Jesus at the well changed the life of the Samaritan woman. It gave her hope and another chance to step out of the life she was currently living, one of self degradation and destruction and into a life filled with acceptance and worth.
But the change in her life didn’t just stop there. God’s word tells us in
John 4:28~29
The woman then left her waterpot, went her way into the city,
and said to the men,
COME SEE A MAN, who told me all things that ever I did.
Could this be the Christ?
What happened next is the power of speaking God’s word to others ~ sowing His seed.
John 4:30
Then they went out of the city and THEY CAME TO HIM.
John 4:39
And many of the Samaritans of that city believed in Him BECAUSE OF THE WORD OF THE WOMAN WHO TESTIFIED, “He told me all that I ever did.”
John 4:42
Then they (the Samaritans) said to the woman, “Now we believe, not because of what you said, for we ourselves have heard Him and we know that this is indeed the Christ, the Savior of the world.”
They “came to Him” “and many of the Samaritans of that city believed in Him because of the word of the woman who testified”. How powerful God’s word is to draw mankind to Himself. Could God do this on his own ~ draw people to Himself? Absolutely! However, God in His matchless love and mercy allows us to be involved in the plan of His redemption for mankind. He places us here ~ right where we are ~ to sow the seeds of His Gospel message to those we encounter every day.
That is what the nameless woman at the well did. She was doing what her normal daily routine demanded her to do ~ go draw water from the well. And while there she drew from the well of the love of God ~ she left behind her waterpot and returned with The Living Water and poured it out on the men of that city.
Her simple act brought many people of that city to the saving knowledge that Christ, the Savior of the world had come.
Now, let me ask you. Who will come to Christ because of the words you sow? God’s word in Matthew 28:19~20 tells us to: “Go, Make, Baptize and Teach”. This isn’t something Christ is suggesting for us to do when and if we feel like it. It is a command. The fields are white for the harvest ~ are you going?  Will you go and sow the seeds of His saving grace for those who are thirsting to death for His Living Water?
Lord, let me ever be mindful of those around me who are so desperate for your water of life. I pray for the Christians in America, and all over the world that we would stand boldly for you and let your life giving water pour out of us and revive the souls who need to drink the water of your saving grace.
Posted by SFM No comments:

I have a favorite devotional book by Dr. Charles Stanley titled “On Holy Ground”. I read through its daily devotions every year. A recent devotion resonated with me. In it Dr. Stanley talks about particular sins that plague us and we need to recognize them for what they are ~ “an offense against a holy God that can only be removed by the blood of Jesus”.  How true that is.
One of the things that I finally recognized in my “particular sin” is found in Romans 6:16. Paul tells us “Know ye not, that to whom ye yield yourselves servants to obey, his servants ye are to whom ye obey; whether of sin unto death, or of obedience unto righteousness?” One morning I realized I was obeying my particular sin ~ yielding to it! To me that was key! The Lord showed me that I was first yielding to it in my mind and then, I was placing myself in the path of it. Did you get that? I was intentionally placing myself in the direct path of it!
Once that was revealed to me I had a decision to make ~ just as mentioned in Romans 6:16. Was I going to obey the sin and be servant to it or was I going to obey my Heavenly Father and be servant to His righteousness? The decision was all mine. God didn’t force me ~ he just showed me the truth, as ugly as it was ~ and let me make the decision.
That morning, with God’s help, I intentionally chose to remove myself from the path of that sin. Was it difficult to do ~ absolutely! I liked it! It made me feel good about myself! Satan never wants to let go of a stronghold he has you in ~ he will fight you every step of the way! Does that sin still waffle through my mind? Yes, but now I can recognize it for what it is and take that thought captive to Christ and let him deal with it. And let me tell you ~ I do that quickly! I don’t allow it to hang around in my mind. If I did, I would start to thinking about it to much and start heading right back down that path, and I don’t want to go there! I know all to well where it will take me!
Only after I had made the decision to turn away from that sin could I then rejoice in the next two verses ~ Romans 6:17~18 “But God be thanked, that ye were the servants of sin, but ye have obeyed from the heart that form of doctrine which was delivered you. Being then made free from sin, ye became the servants of righteousness.”
What about you? Are you struggling with a particular sin? If so, ask the Lord to reveal the reality of it you ~ show you what it really is and where it is taking you. Then, make the decision to walk away. No matter what you think you are giving up, how good it seems, or how good it makes you feel right now ~ get rid of it! Loved one let me tell you from experience ~ at the end of that road is death! Maybe not physical death but death of self respect, your credibility, your testimony and a million other things that you are placing at risk. Satan’s scheme isn’t worth it ~ don’t listen to him!
Walk away and ask the Lord to cleanse you from it with his blood and rejoice that you have chosen to obey your Heavenly Father.
Lord, thank you for showing me the sin I was allowing in my life. Let me see my sin as you see it ~ no matter how ugly it may be. Thank you for your faithfulness to forgive me. Help me always make the decision to follow you.
Posted by SFM No comments:

A Few of My Favorite Books 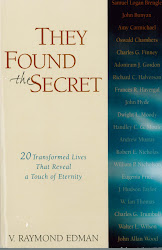 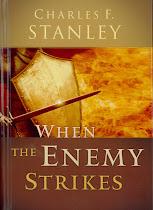 Charles Stanley ~ When The Enemy Strikes

Email Marketing You Can Trust